A disagreement over whether unvaccinated people can provide health services appears to be intensifying in the B.C. Interior.

Registered nurse Svetlana Dalla Lana has written a post on Facebook saying that a new clinic that she's associated with—Ezra Wellness in Grand Forks—has "DIVORCED itself from the BC Health Professions Act".

As a result, they're no longer permitted to work for the Interior Health Authority.

Moreover, Dalla Lana insisted that Ezra "does NOT represent, support or associate with ANY criminal organizations such as the BC Colleges of Nurses and Midwives".

This came after an Interior Health spokesperson told Castanet that everyone providing medical care in B.C. must comply with the legislation.

Health Minister Adrian Dix has previously said that the government will be instructing health-profession licensing bodies to require people to be vaccinated against COVID-19 as a condition of retaining a licence.

In another post on Facebook this weekend, Dalla Lana maintained that people working at Ezra are no longer registered nurses or nurses. She's still registered, according to the B.C. Colleges of Nurses and Midwives website, as of October 31.

In that second post, Dalla Lana reiterated her previous statement that Ezra is divorcing itself from these regulatory bodies.

"We welcome joint investigations and will be more than cooperative at fully disclosing the CORRUPTION within your organization," Dalla Lana stated. "It would be in your best interest to peacefully move along and not interrupt the disease prevention and wellness promotion we at Ezra are establishing for the people of Canada." 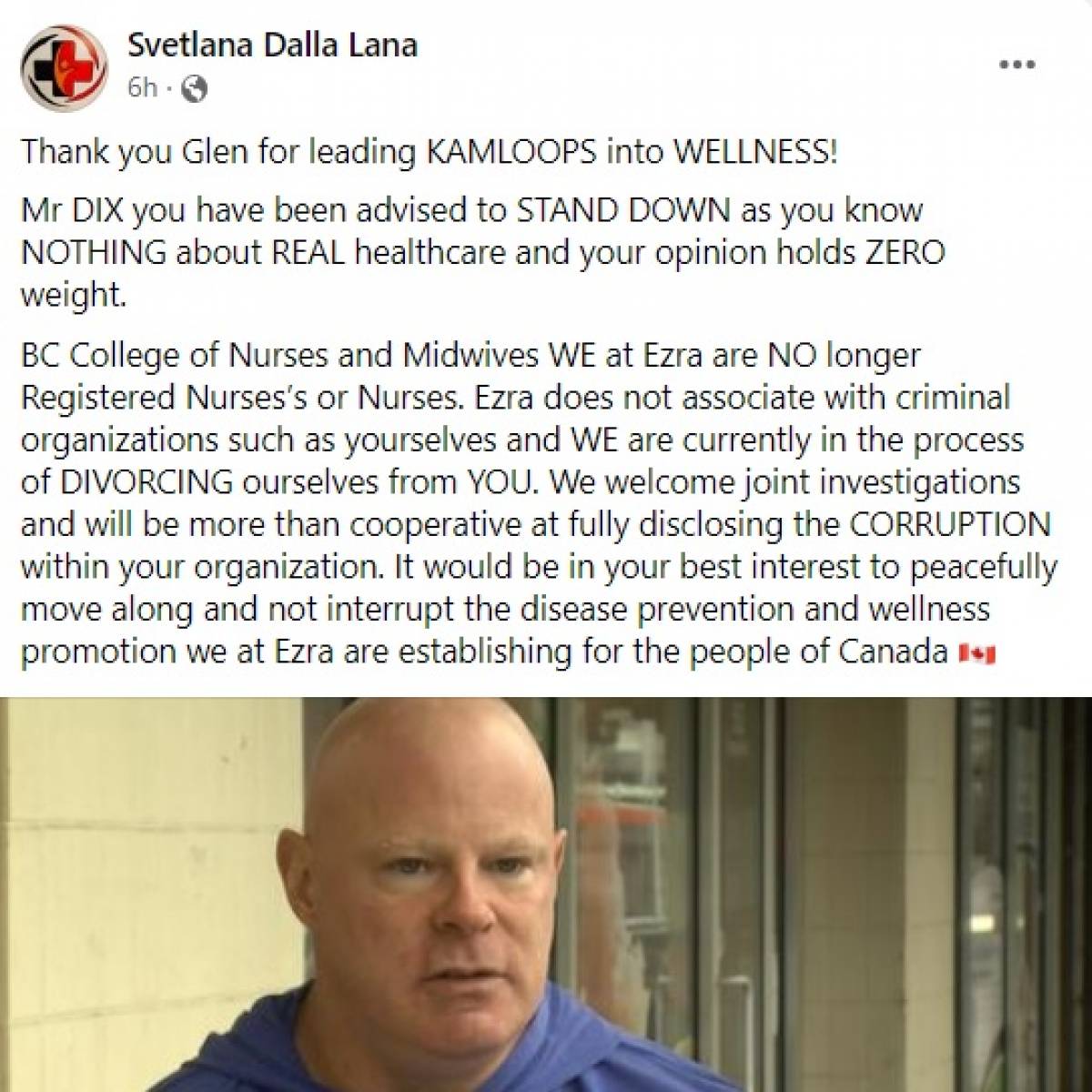 This is one of Svetlana Dalla Lana's recent posts on Facebook. The photo below is of Glenn Alderdink from a Castanet news story. Facebook

Dalla Lana has also called on Dix to stand down as health minister because "Bonnie and you have destroyed BCs healthcare".

None of Dalla Lana's allegations have been proven in court.

According to her Facebook page, Dalla Lana has tried to organize protests against vaccine passports outside long-term care homes in Grand Forks.

Castanet reported that Aalderdink was an organizer of a protest against the proof-of-vaccination requirement in Kamloops on September 1.